This next symbol we are going to talk about is another popular fashion trend. It is known as the infinity symbol.

The history goes that this is just a mathematical symbol representing infinity, adopted in 1655 by John Wallis. Wallis never fully explained why he chose this symbol, though there are suggestions as to the why, such as it looks like a variable for the Roman numeral of 1,000. But in all honesty, it was never fully explained. It is notable, however, that Wallis was inspired to discover algebra and the power of equation after studying Freemasonic symbols. Knowing what we know, if you have read my other blogs, that Freemasonry is an occult Luciferian secret society, then you know about the magical implications in their use of symbols.

The Masons tend to use the ouroboros, which is a snake eating it's own tail as shown here: 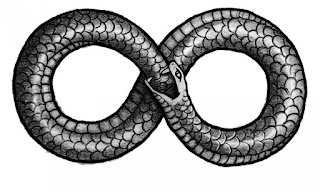 There is also another form of this ouroboros of just a snake in a circle eating it's own tail: 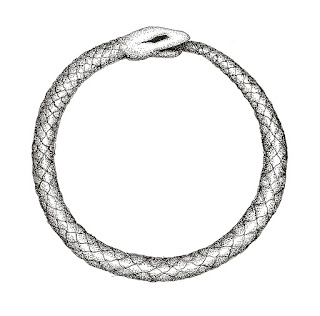 Both represent infinity and it is widely used in Freemasonry. It reflects a rebirth within Freemasonry, the Master Mason rising from the figurative grave into the 3rd Degree. It is also used as a clasp for the Mason apron: 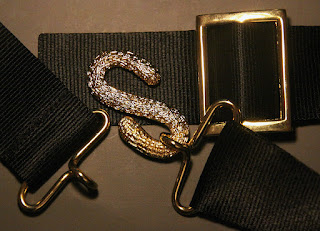 The ouroboros symbol of the snake has long been used since even Egyptian times, and was adopted by alchemists (mystical magicians). Of course one does not have to look far to see that the Jewish Kabbalah has a hand in using this symbol and it is very interesting to note what they believe it represents. In Kabbalah, the ouroboros represents a ray called Okidanokh, the ray is a ray of creation that emerges from the unknowable divine. The ray of creation flows down through the tree of life to Malkuth (the physical level), and down further into a world called Klipoth ( the inferior dimensions) in the very center of the planet, exactly in the 9th sphere, which is the very center of the earth where Dante Alighieri, the writer of The Divine Comedy, found Lucifer. And so the ouroboros is related to the mystery of Lucifer. They believe he is the light bringer or light carrier as do the Freemasons, though they will never admit to that because it is their secret. One has only to read the books written by Albert Pike to see that they do worship Lucifer. If you have any reason to doubt, here is a direct quote from Albert Pike in his book Morals and Dogma:

“Lucifer, the Light-bearer!  Strange and mysterious name to give to the Spirit of Darkness!  Lucifer, the Son of the Morning!  Is it he who bears the Light, and with its splendors intolerable, blinds feeble, sensual, or selfish souls?  Doubt it not!”

Here is another excerpt from the same book and it is a secret that he explains is given to 29th-33rd degree Freemasons. 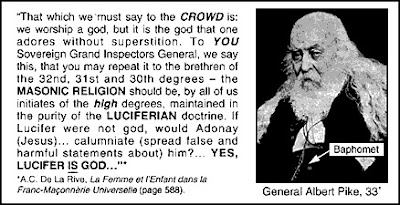 This man was a pedophile and a disgusting human being, but because of his role in Freemasonry, Washington DC has a statue of this man displayed for all to see. 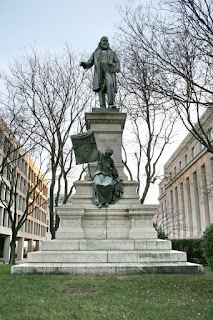 In witchcraft, it is used as not only a magical symbol in regards to infinity, it also signifies unity and the power of 8. In witchcraft they refer to this symbol as the Lemniscate, something that represents the star goddess which they believe is the creator. They have books on the power they believe emanates from it such as this one: 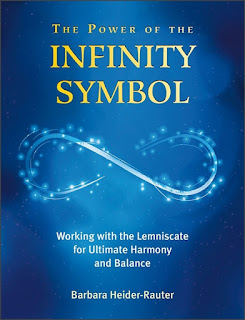 They also use the symbol in Tarot card reading. 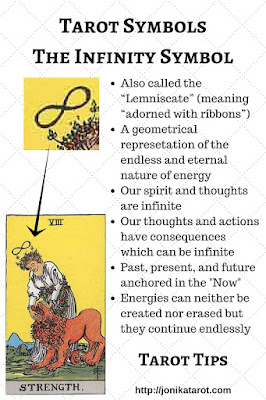 Here is a short list of symbols used in witchcraft and right at the center you can see the infinity symbol: 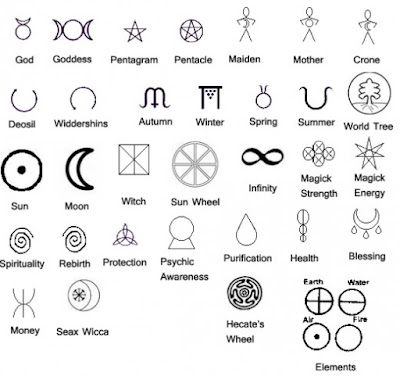 As I stated above, the ouroboros originated in ancient Egypt, from there it was adopted by way of Greek magicians and entered Gnosticism and heavily used in alchemy. All magical and occult practices. 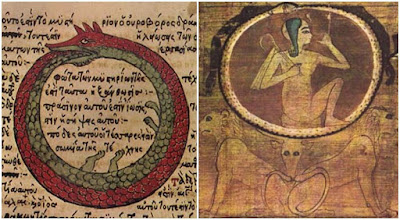 Again we see that the world tries to repackage these symbols and sell them to us without the people knowing where it came from and what it's purpose is. It is not a cute symbol that signifies unity and forever, it is a magical symbol that Christians need not even bother with. Time and again the world tries to deceive us, and if we blindly accept their signs and symbols, we are setting ourselves up for demonic and spiritual attacks. They are a door that we allow to open in our homes for these demons to come through. We need to be wise and spiritually discern the evil in these last days. As for me and my house, we will serve the Lord.

"Be sober, be vigilant, because your adversary the devil, as a roaring lion, walketh about, seeking whom he may devour." -1 Peter 5:8